What is a Watershed?

What is a watershed?

Water is a vital and precious natural resource that supports all life on Earth and connects us all. Freshwater is a small fraction of all the water on the planet. Most water is saltwater stored in the oceans. Only 3% of all the world's water is fresh, and yet most of that is locked away, frozen in glaciers and in ice at the poles. Less than 1% of all the water on planet Earth is accessible freshwater and it is stored in watersheds. So, what is a watershed?

A watershed is a natural area of land that collects water from the atmosphere and transports it to the ocean through a single waterway, such as a river. Watersheds are divided from one another by mountain ranges. As water falls as precipitation on the mountain tops, it runs down the surface to small creeks and streams called tributaries. Tributaries carry the water to larger rivers, which then carries the freshwater out to the ocean.

The mid watershed is a little lower in elevation. This where you might find rural communities, farms, and agriculture.

Watersheds can be very big. It's important to remember that no matter where you are - you are in a watershed!

Discover what watershed you live in and explore Our Water Regions: 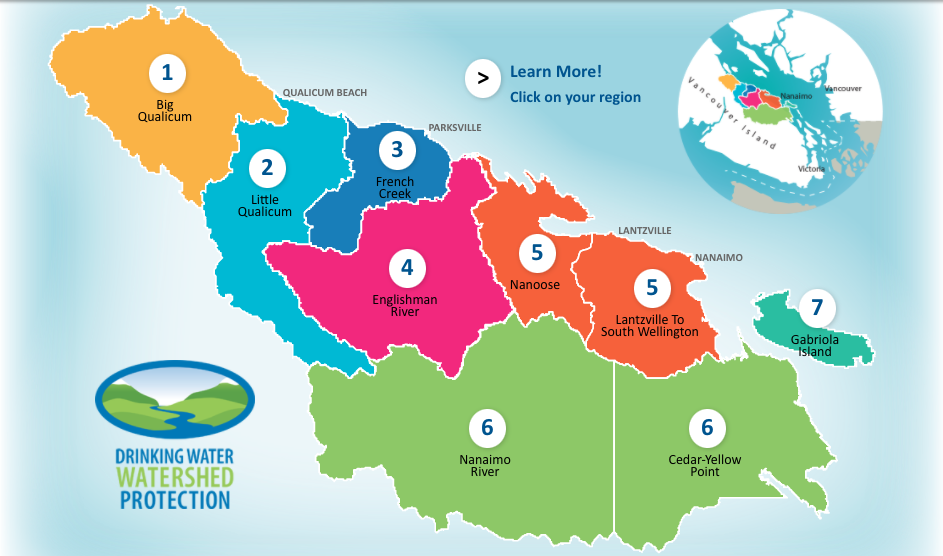 Features of a watershed:

Water moves through the environment in a cycle nearly as old as the Earth itself.

The water cycle begins with Evaporation, where the sun heats up water in the ocean or on land, turning it into a gas so that is light enough to rise up into the atmosphere. High up in the atmosphere, evaporated water droplets collect together in clouds in the second step of the water cycle called Condensation. While trapped in a cloud, water can be carried very far distances by the movement of the wind. For instance, water droplets evaporated from the surface of the ocean can be carried all the way to the mountain tops while condensed in a cloud! The last step in the water cycle is Precipitation, where the water in the clouds becomes heavy enough to fall back down to earth as rain, hail, or snow.

And that’s how water moves through the atmosphere to the watershed; evaporation, condensation, and precipitation. 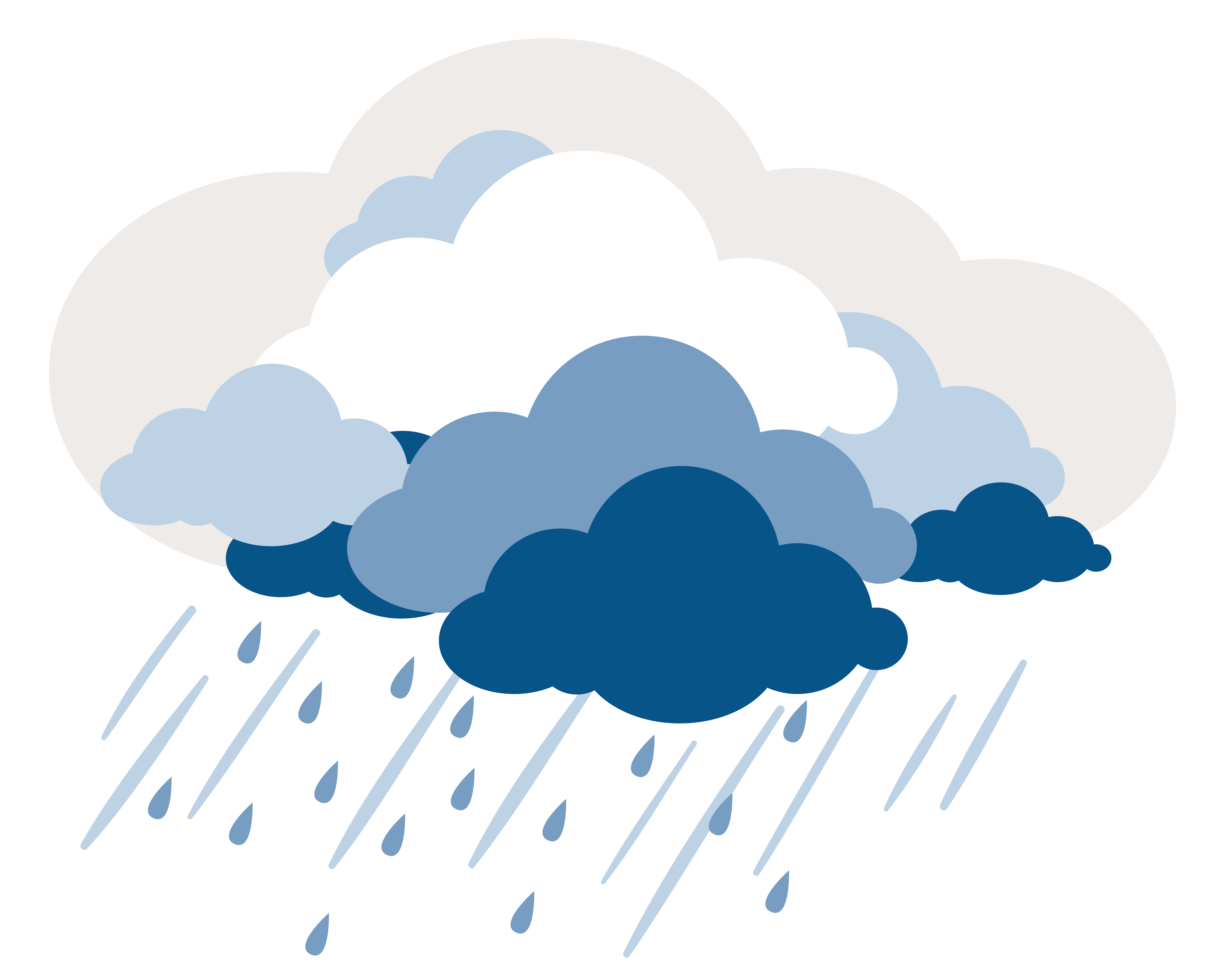 When precipitation (rain, hail or snow) falls on the mountain tops, some of it runs down small creeks and streams leading to the river. This is called run-off. When the water enters the river, it is carried across the land until it reaches the ocean. As freshwater moves across the Earth’s surface, it picks up and carries minerals and nutrients on its journey to the sea.

Freshwater that is on the surface of the Earth is called surface water. Surface water can be stored in creeks, streams, rivers, lakes, and wetlands where it provides habitat for fish and other species, hydrates plants and animals, and offers a space where many of us go to swim and enjoy nature! 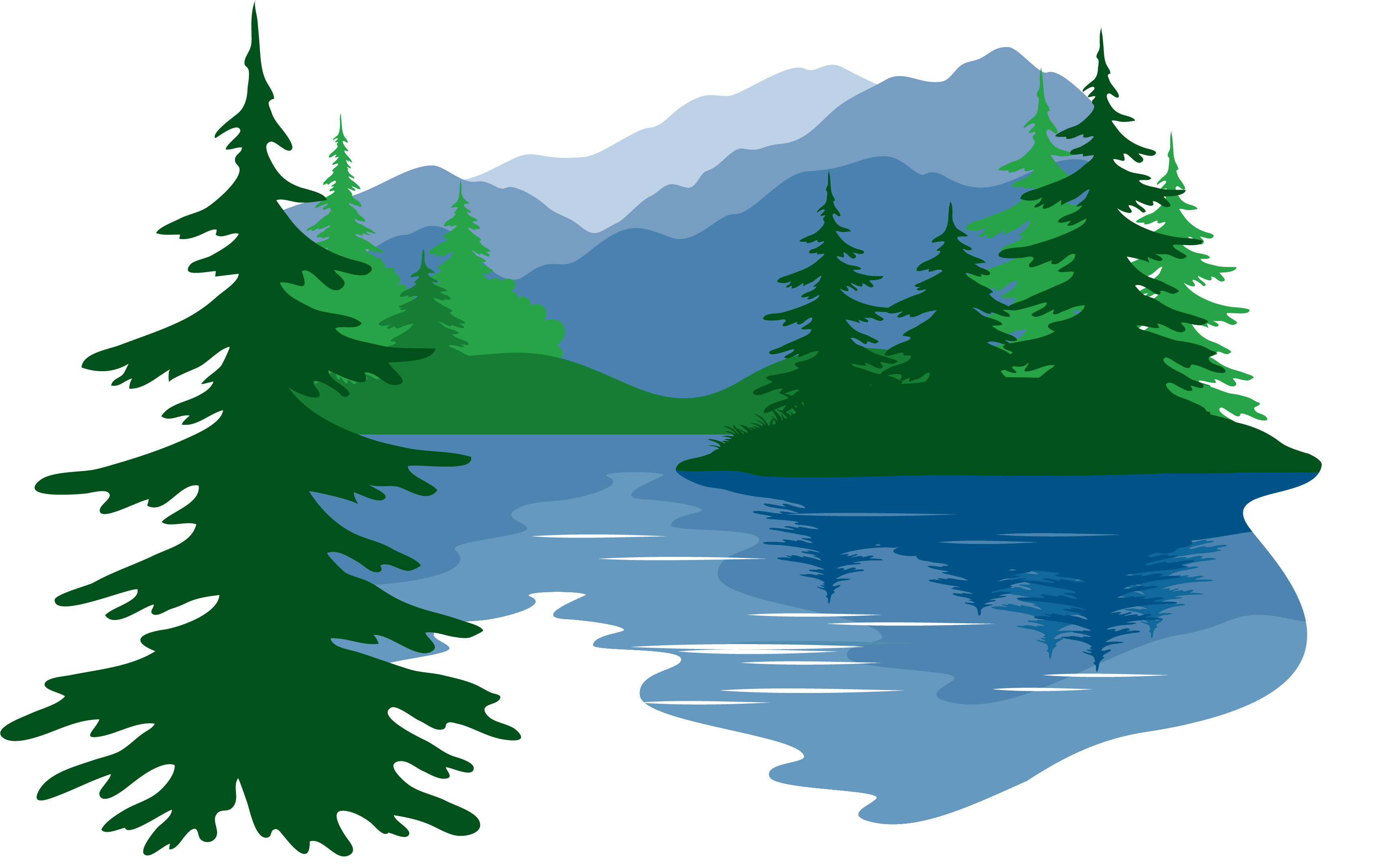 Not all freshwater stays on the surface of the Earth. As freshwater moves across the Earth's surface, some of it infiltrates or seeps into the layers of soil, sand, and rock below the surface.

Deep below our feet lie aquifers – areas of bedrock or sand and gravel that store groundwater. Tiny cracks and spaces in the rock, sand, and gravel trap and store fresh water underground. The layers of earth act as filters, which trap bacteria and pollutants and clean the water as it infiltrates.

Groundwater is not static, it moves through the environment too – though sometimes very slowly! Groundwater is closely connected with surface water – in fact, they are the same water! In times of drought, groundwater can resurface into creeks and streams, allowing them to flow even during the hot summer months, where it provides habitat for fish and other animals.

Trees in the riparian zone shade the stream or river water from the hot sun, keeping the water nice and cool for fish and other critters that live in the water.

The overhanging branches and leaves of trees and plants sometimes drop insects into the water, which provides food for fish, like trout and salmon.

The roots of the trees and other plants hold the soil, rock, and dirt on the stream bank in place so that it does not fall loose and cloud the water, making it difficult for fish to live in.

A tributary is a small creek or stream that leads to a larger river. Even though they may be relatively small, many tributaries together transport lots of water (or run-off) from the mountain tops to a single river. It takes many tributaries to make rivers, like Nanaimo River or Englishman River, so big!

You can think of tributaries like the roads of a city. When you leave your house in a car, you start from your driveway which leads to your neighbourhood street. From there you might drive to a bigger and busier road, and then an even bigger and busier road until you reach the highway, which is the biggest road of all! The small roads leading cars to the highway are like the small tributaries flowing into a river.

Wetlands are just that - wet land! Wetlands are areas of land that are permanently or seasonally filled with water. They are important transition areas between surface and groundwater. They act by slowing the flow of surface water, capturing it, and allowing it to infiltrate the ground below.

There are many types of wetlands, including marshes, swamps, and estuaries. Wetlands support diverse plants and provide habitat for many insect, amphibian, bird, and fish species.

Watersheds are the source of drinking water!

Water goes on an incredible journey to reach your drinking glass. But depending on where you reside in the RDN or member municipalities, that journey might look a little different.

Many people in the RDN, particularly in the larger and more densely populated cities, depend on surface water for drinking and other household uses.

About half of all the residents within the RDN depend on groundwater for their drinking water.

Some RDN residents get their drinking water from their very own private wells. They are responsible for maintaining their wells and providing clean drinking water to their families and friends.

No matter what route water takes to get to your tap, it begins its incredible journey from the same place. Whether you rely on surface or groundwater, a water service, or a private source, all water is connected by the environment in which it cycles and it is up to all of us to conserve and protect our shared resource for the benefit of future generations. 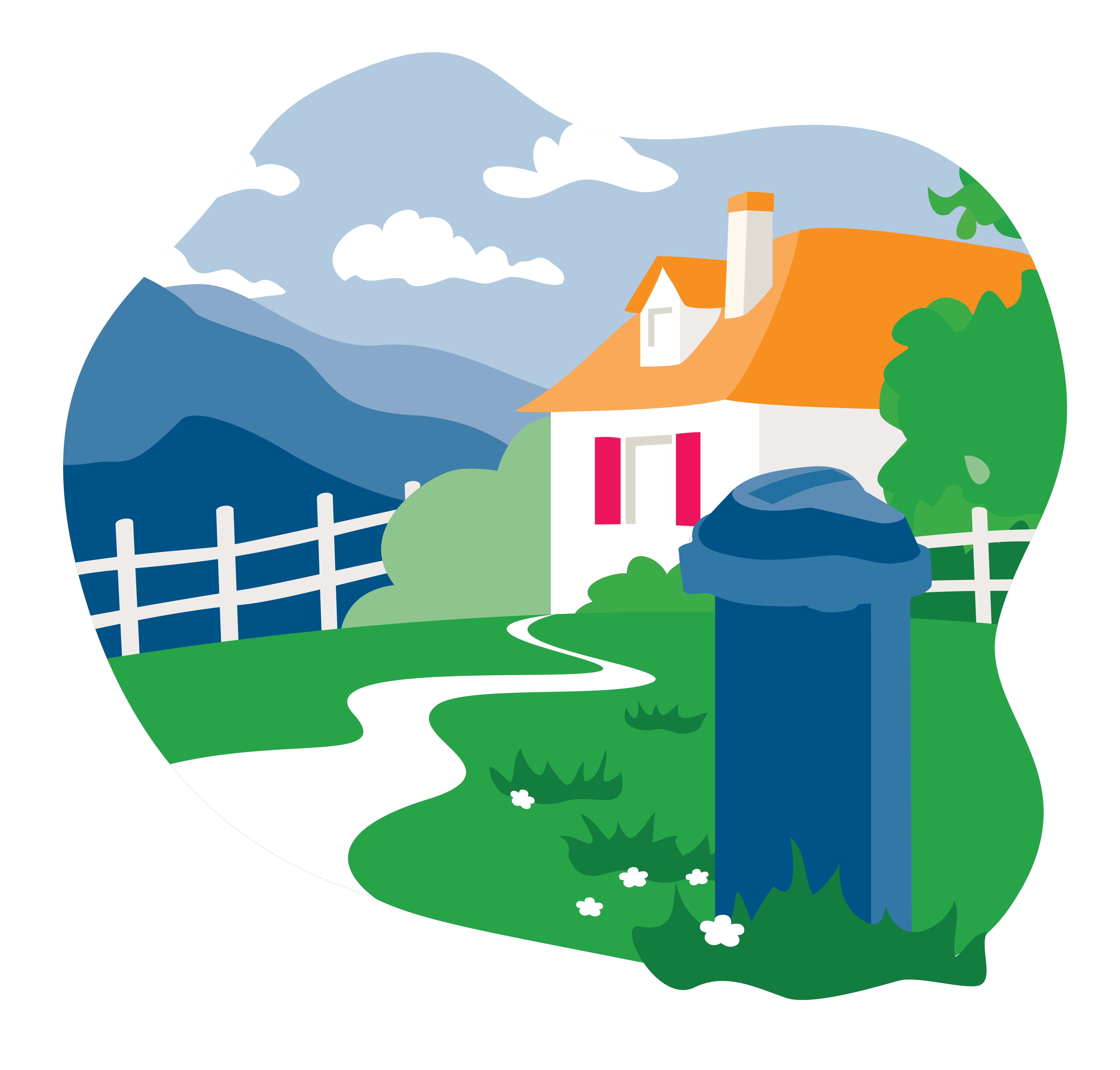 Our Impacts on Water

On the ‘wet’ coast of B.C., it is easy to take water for granted, and yet it faces many challenges, here and around the world.

A changing climate threatens the ability of watershed ecosystems to effectively collect, filter, and store precipitation.

Everyday human activities can have a huge impact on water quality and stream life. Pollution such as litter and garbage, gas and oil, herbicides and pesticides, and contaminated soils can enter our waterways and impact the water quality of both surface and groundwater.

What are some ways we can reduce our water usage to conserve water and protect water quality? Visit Use Water Efficiently and Protect Water Quality to learn more.

Ready to join Team WaterSmart?! Put your watershed knowledge to the test with games and activities, share your Watershed Wonders, and learn more by visiting GetInvolved! 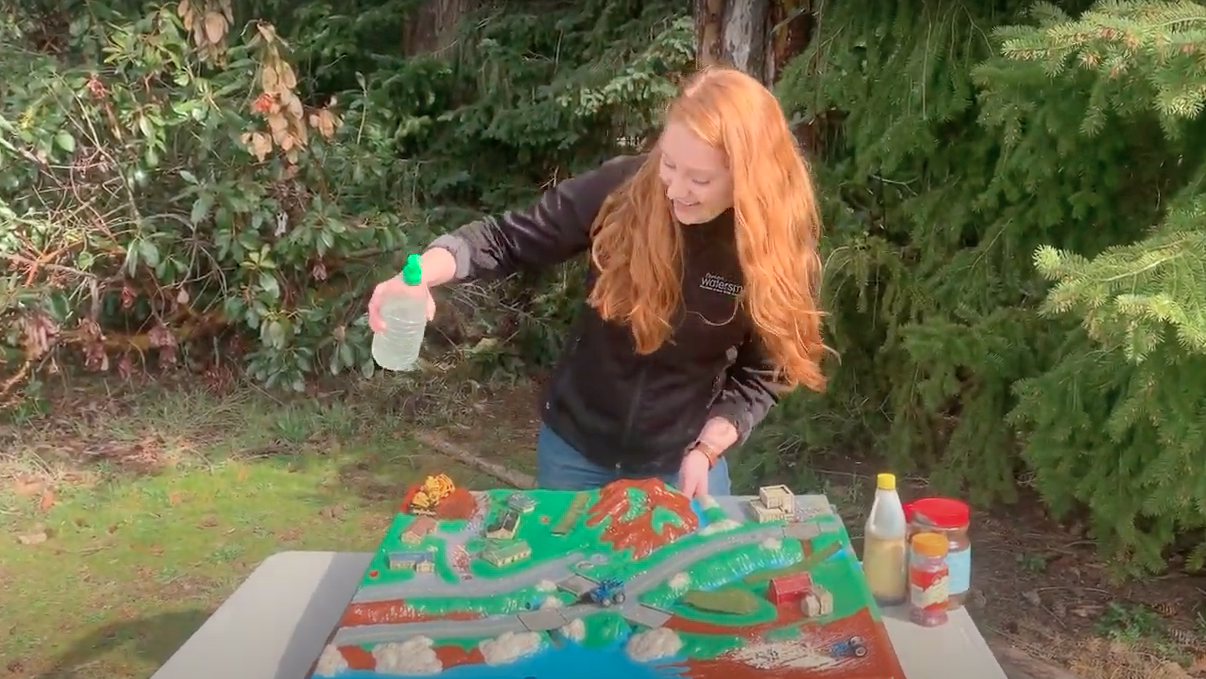