Wastewater treatment is essential to protect our water resources, the environment and human health.

Wastewater, liquid waste, and sewage are terms for "used" water and the wastes that it carries. Basically, they are terms for what is flushed down the toilet or washed down the drain. It includes fats and grease, organics, minerals and chemicals in solution/ suspension in the water. Wastewater can also include rain water, groundwater or snow melt (inflow and infiltration) that make their way into sewer pipes.

How does wastewater move from households/businesses to a treatment facility?

Wastewater from households and businesses drains into a collection system. Sewers are built to follow the natural slope of land, allowing gravity to do most of the work to transport wastewater. Low elevation areas use a pump station to pump the wastewater to a treatment plant. 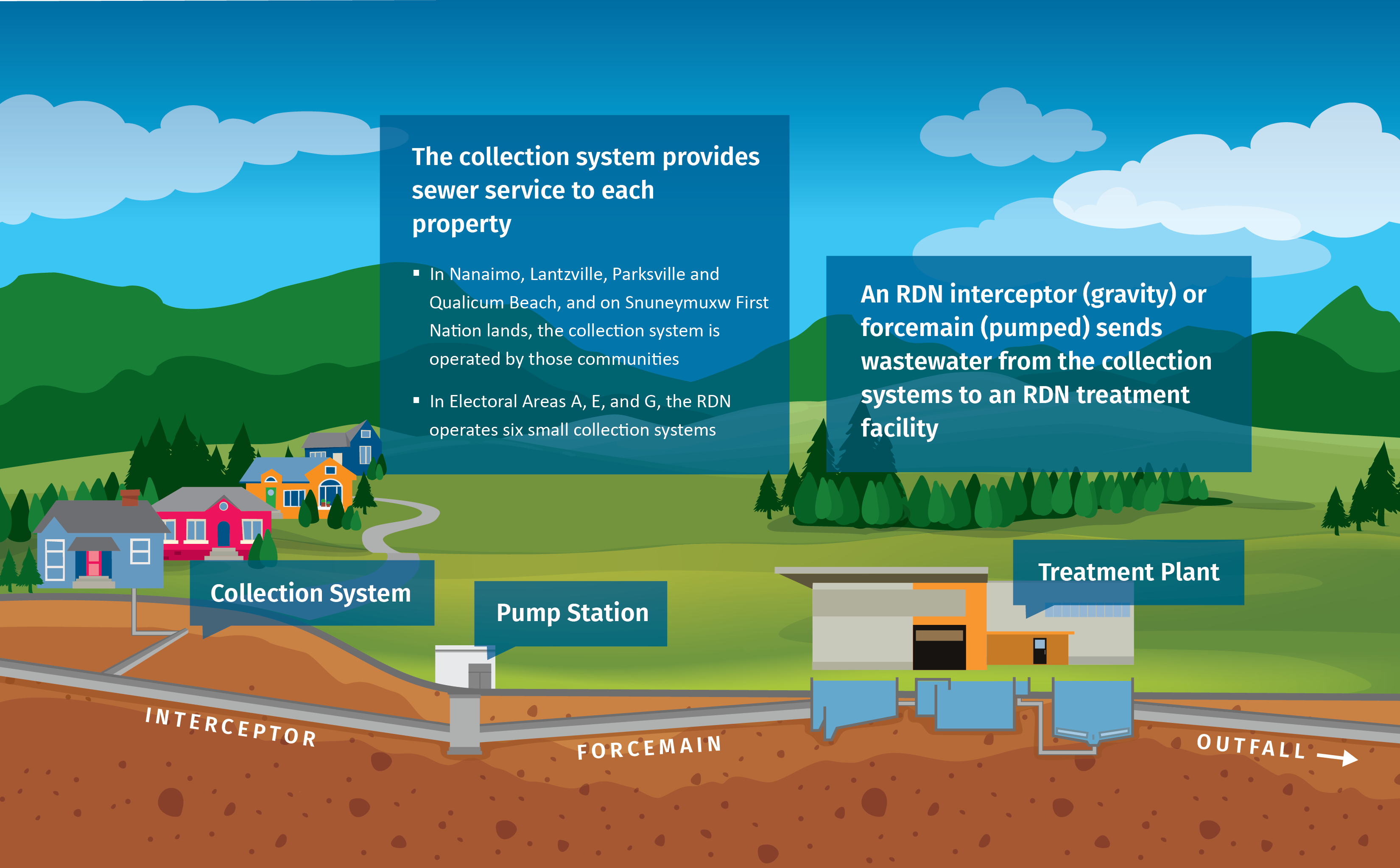 What are the different types of wastewater treatment?

Wastewater entering the treatment plant first passes through screens and grit tanks. The screens remove rags, wipes, sticks, plastic and larger objects. Grit tanks settle out heavy particles like sand and stones. The screenings and grit are transported to the Regional Landfill for disposal.

After preliminary treatment, wastewater flows into a primary settling tank where it is held for several hours. Time and gravity allow solid particles to settle to the bottom of the tank. The settled solids, known as primary sludge, are collected and pumped to a digester for further treatment into into reusable biosolids. Fats, oil and grease that float to the top of tanks, are skimmed off, dried, and sent to the landfill. Chemically-enhanced Primary Treatment adds a coagulant (e.g. alum) and flocculants (e.g. anionic polymer) to the effluent to enhance the settling of solids. Primary treatment removes about half of the Biological Oxygen Demand (BOD) and 60-70% of Total Suspended Solids (TSS), to produce effluent with a BOD and TSS not exceeding 130 mg/L.

Following primary treatment, effluent is pumped to the secondary treatment stage where it is aerated and biologically treated. It may take one of several forms; for example, either a trickling filter (French Creek) or a sequencing batch reactor (Duke Point). The growth of micro-organisms results from the consumption of organic matter in the wastewater as their food supply. The micro-organisms create a solid organic material called secondary sludge. Secondary sludge is thickened, pumped to digesters and converted into reusable biosolids. Water is removed from the biosolids, surplus water from the dewatering process is returned to the headworks.

Secondary treatment is a biological treatment process that removes more than 90 percent of BOD and TSS and produces an effluent quality with BOD and TSS not exceeding 45 mg/L.

Tertiary treatment is often used when there is discharge to lakes or rivers and the phosphorus levels need to be significantly reduced, or if there is a desire to reclaim effluent. Currently, no treatment facilities in the RDN use tertiary treatment.

What levels of wastewater treatment are provided in the RDN?

Biochemical Oxygen Demand (BOD) is a measure of the quantity of oxygen consumed by microorganisms to break down organic matter in water. A high BOD means that there will be less oxygen available to aquatic life.

Total Suspended Solids (TSS) are solid pollutants that would be captured on fine filter paper. They are visible in water and decrease water clarity. High concentrations of TSS can cause problems for aquatic life.

How are biosolids produced?

During the treatment process, sludge (organic and inorganic materials that settle in a primary clarifier or secondary clarifier) is sent to digesters for solids processing. In the digesters, the sludge is digested by micro-organisms using the organic material present in the solids as a food source and converting it to by-products such as methane gas and water. Digestion reduces pathogens by more than 98%. Mechanical equipment is used to remove water from the biosolids, producing the final dewatered soil-like product.

The majority of wastewater in the RDN comes from residential water use. By conserving water at home, we produce less wastewater and can reduce the cost of treatment.

How does the RDN manage odours from the wastewater treatment process?

How do I know if I'm on sewer?

If you benefit from sewer services, your property tax and/or utility bill will include a charge for this service. Most people living within Nanaimo, Lantzville, Parksville, Qualicum Beach and French Creek receive sewer services. However, some properties within municipal boundaries have a private onsite (septic) system and some people in the Electoral Areas have sewer. 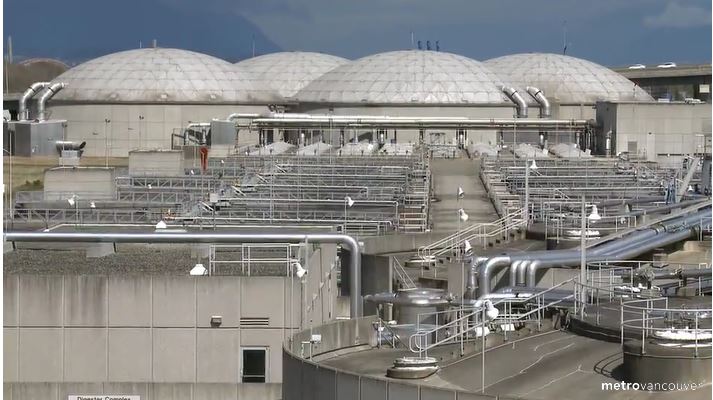